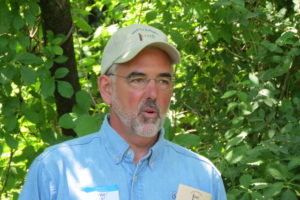 Sadly for us all and Burlington’s trees, Warren Spinner, Burlington’s arborist, hung up his pruners, loppers and saw on Friday, August 18, 2017, retiring after over 35 years of service to the Burlington Parks Department. Burlington is graced with thousands of trees along its streets and in its parks. Warren planted many of them and has been giving them the TLC they needed to help them thrive. The Burlington Parks, Recreation & Waterfront Department and Branch Out Burlington! co-hosted an event to celebrate Warren’s accomplishments and thank him for his dedicated service. Branch Out Burlington! will miss his steady hand and clear head, but we hope he will continue to play a role in our organization in the future. A wooded section of Oakledge Park overlooking the lake has been designated “Warren’s Woods” in his honor. It features his favorite tree in Burlington, a large shagbark hickory, and not far away is his second favorite tree, a 200-year old white oak along the shore.

A video produced by Dan Cahill of the Burlington Parks Dept. featuring Warren and what he means to those from the Burlington and beyond can be viewed at:  https://vimeo.com/230485146

Written by Karla on August 22, 2017. Posted in Uncategorized