Emerald Ash Borer and the Threat to Burlington’s Trees

A few weeks ago the presence of emerald ash borer, (EAB) was confirmed in Vermont for the first time. While its arrival here has been anticipated for several years, the hope was that we would have more time before having to begin to implement a strategy in Burlington for the long-term management of this devastating exotic insect pest. 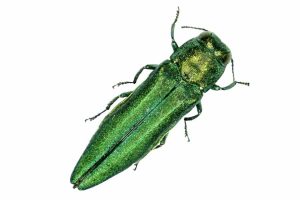 Emerald ash borer first appeared in the United States in 2002 near Detroit Michigan. It is believed to have been brought into the country in wooden packing crates from Asia. The adult emerald ash borer is a small metallic green beetle about a half inch long that is known to attack all native species of ash in North America. The adults feed on the leaves of ash before depositing eggs on the bark of the tree. Upon hatching, the larvae burrow through the bark and into the inner bark layer or cambium of the tree. There they feed on the phloem and outer xylem forming s-shaped galleries and essentially disrupting the vascular system of the tree causing canopy dieback, rapid decline, and eventual death of the tree. The rapid rate of reproduction of the beetle can lead to very high population levels in a few years following the initial infestation and trees can be killed within two years if heavily infested. For more information on the life cycle of EAB, its identification, and the signs and symptoms of infestation go to vtinvasives.org.

Despite extensive efforts to contain and eradicate EAB in Michigan when it first was detected, the insect has prevailed and has devastated ash populations across the mid-west and northeast killing millions of trees and costing millions of dollars. EAB has been detected in 32 states and 3 Canadian provinces.

The confirmation of EAB in Vermont has significant implications for the City of Burlington both financially and aesthetically as ash currently accounts for about 10 percent of the total 12,000 plus trees in our inventory which includes trees along streets, in parks, and in cemeteries. This figure does not include ash in woodland habitats such as forested parkland or areas along the bike path.

An EAB management plan has been developed by the former City Arborist, Warren Spinner that outlines management options and provides cost estimates for each option based on the total number of ash currently in the city inventory. The location, as well as the current condition of all ash in the inventory, has been updated and will be a valuable tool moving forward as we begin to make decisions to implement various strategies.

Management options outlined in the management plan include closely monitoring city ash trees for signs or symptom of EAB, proactively removing a certain percentage of ash in the current inventory, primarily those that are in the poorest health, and planting new trees in their place, and treating healthy high value trees with an approved insecticide prior to infestation to protect them from borer attack. Removals and replanting or protective treatment both result in significant expense that far exceeds the current annual budget for the ongoing management of Burlington’s urban trees and each option will likely invoke an emotional debate by those advocating for or against each option. Funding of implementation of the EAB management plan may require additional funding outside of the annual budget for tree maintenance and funding for long-term plans to treat and retain healthy trees may be achieved in part by an appeal to private citizens to ‘adopt a tree’ and provide financial assistance for its long-term treatment.

Ultimately, whatever plans are implemented, it will likely be a combination of strategies that strives to balance potential environmental impacts and budget limitations, as well as the support of the city administration and the public.

While ash currently make up a significant percentage of the city’s tree inventory, it is worth noting that sound management strategies by the former City Arborist over the last two decades have served to significantly diversify the number of tree species in the city’s inventory and no new ash have been planted in the city since the arrival of EAB in Michigan in 2002. As a result, Burlington is far better positioned to manage the impacts of EAB than it was to recover from the loss of elms throughout the city that fell victim to Dutch Elm Disease in the past several decades.

In the coming weeks and months, I will be scheduling time to meet with city officials, attend neighborhood planning assembly meetings for each ward, and meet with other interested community groups to further educate them on EAB and outline in more detail the management strategies and their relative costs, as their feedback may help to direct decisions surrounding the implementation of management options for EAB. I will also be researching the EAB management plans of various communities throughout the region who have been actively implementing their plans for the past several years to gain a better understanding of what strategies have proven to be most effective, as well as what creative strategies have been successful in aiding in the financial support of their plans.

Written by Karla on May 30, 2018. Posted in Uncategorized