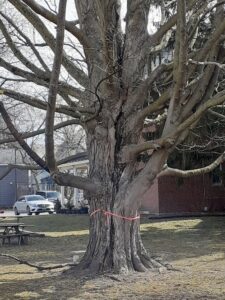 We all know trees don’t live forever, but it is always a sad day when a grand old one we have known for so long reaches the end of its life. That’s why we are sorry to announce that the large sugar maple tree in front of the Ronald McDonald House Charities on 16 South Winooski Ave, in Burlington will be removed soon. It has a major split in the trunk and internal rot that weakens its structure. It is dying and poses a serious health and safety risk to all those who play under it. Two other trees on the property are also in decline and must be cut down. The good news is with help from Branch Out Burlington! and the Burlington Department of Parks, Recreation and Waterfront, two trees will be planted this spring to replace them. One will be an American sycamore, which will grow quickly into a tall spreading tree to provide shade for those who play under it. It has beautiful, mottled bark and leaves as large as a dinner plate!

The maple we are losing is estimated to be at least 120 years old. It was most likely planted soon after the house was built in 1877 as a parsonage for the First Congregational Church. It has seen a lot over those years. In 1884 Susan B. Anthony argued for an amendment to the constitution granting women the right to vote. It took 34 more years before the 19th amendment was passed, granting women voting rights. The tree must have shuddered during the Great White Hurricane in March 1888. That is considered the worst blizzard ever recorded in Vermont (40 inches of snow fell in two days!). This grand old maple also survived the ice storm of 1998, which many of us can still remember! It saw two World Wars and many other lesser but equally tragic national and international conflicts.  But still this towering maple lived on, offering cooling shade and brilliant fall foliage, year after year.

The Ronald McDonald House Charities took over the home in 1984, and ever since has provided a refuge for family members supporting a sick child receiving services from the UVM Children’s Hospital. Thousands of children and their families have played around this maple tree, and hopefully the young sycamore we plant will soon replace the shade and comfort we received from the cherished maple.

Written by Karla on March 28, 2022. Posted in Uncategorized