Every August for the past 5 years I have heard the sound of fruit falling on a tin roof. Sometimes the sound

wakes me up from dreams, other times it reminds me of all the work that has been done to eat this delicious treat. My favorite tree in this great city is a 75 year old pear tree that towers over our 3 story home.

When I first moved to Russell Street in the Old North End, I lived in a small apartment in an old Victorian home. Next door was a dilapidated stucco monster of a house. The back yard was so filled with rotten tree trunks, old fences, cinder blocks and garbage that only the cats that overran the home dared to navigate it. Worse yet were the pears of that first year that fell to the ground only to rot becoming the breeding grounds of cluster and fruit flies.

It wasn’t until the second year that I even considered eating one of those pears. Sitting on a staging plank 20 feet in the air, I was doing work on the apartment I rented. From my vantage I could see Sue, the owner of the stucco monster walking barefoot down the drive way. At 71, Sue was already showing some pretty advance stages of memory loss. She was generally unkempt with oversized dirty clothes and it had been quite awhile since she had interacted with anyone. It could easily be said that Sue was an exile on Russell Street. In her hand was one of the pears. We began to talk. And yes, I started eating the pears.

After that, Sue and I became friends. Her memory loss really inhibited her abilities to speak, so she created a language of her own that the neighbors called “Sue speak”. I was one of the few people that could understand her. Words like “four-footed” referred to “4-wheel drive” on a truck. “They did it all wrong” was generally a complaint lodged against the city or the contractor who didn’t complete some work promised on her home. When Christmas came I would wade through the debris of Sue’s home to bring her a card and some hot food. We would look through her photos and I would begin to be able to piece together the amazing story of her life.

In the spring, I lost my job and found myself with a little more time on my hands. The cleaning of Sue’s back yard became a major focus for me as I hauled all the rotten tree trunks off to the wood burning plant and took the rest of the garbage to the dump. By that August we had four lovely raised garden beds, a grass lawn, and one amazing pear cider pressing party with all of our neighbors and Sue.

This pear tree is epic. On wet years it produces such a bounty of pears that we could press 5 gallons of cider and fill our chest freezer with pears for winter and still have pears going bad. It is at least 35 feet in height, and is around 75 years old as it was planted by Harry Rosenberg, a former property owner sometime in the 1940’s. The fact that it, and the home, have with stood so much abuse and responded with such health is a testament to its strength.

Last summer, it was determined that Sue was unable to live alone any longer and she was transitioned into 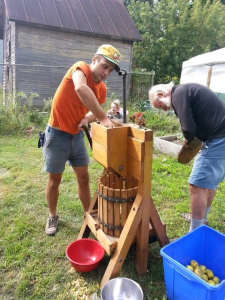 assisted living. Before she went, she made it very clear that she wanted my wife and I to buy her house because “That guy!” meaning me, “Is going to make everything right!” By some miracle we were able to buy her home, and by an even greater miracle we were able to put back the gutted pieces of the stucco monster and “bring it back the way it was!” giving it a very high level of historic restoration.

At the end of this past August, as we do every year, we held Sue Ball day and invited the neighbors for our pear pressing. We pressed many gallons from that tree, but this year is a bounty, and there are still many pears left on that tree to eat.