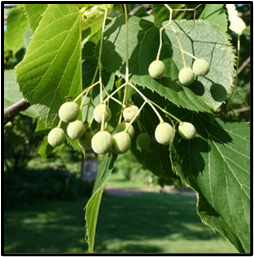 American basswood or linden is a medium to large, fast-growing, deciduous tree with a broad, pyramidal shape. Basswood is native to a wide variety of habitats across eastern North America from Quebec to North Carolina. It grows 75 ft tall and 40 ft wide with a straight trunk. Leaves are large and heart shaped. Yellow flowers bloom May to June, emitting a heavenly smell that permeates the air around them.  The flowers can be used to make tea. Small, rounded fruits are fuzzy and held in clusters. Basswood is derived from bastwood, referring to its tough inner bark or bast, which has been used to make rope. Sweet tree sap has also been used to make syrup. It is a beautiful shade or flowering tree that attracts birds, butterflies and other pollinators. It is commonly planted along streets. It tolerates alkaline soils and shade and will grow well in full sun to part shade. It grows best in plant hardiness zones 2-8. The one down-side is that aphid infestations sometimes occur that are a nuisance for home and car owners. The aphids excrete a sugary fluid called honeydew that drips on cars and sidewalks. Sooty mold grows on the sticky surfaces, creating a blackish residue. Guess you gotta go with the flow sometimes. 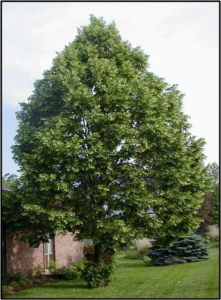 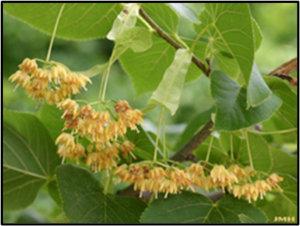