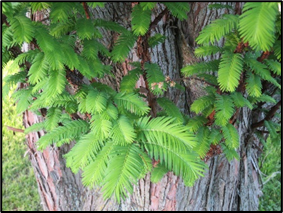 A few years ago, during BOB!s tree walk at Lake View Cemetery, I learned about the dawn redwood, Metasequoia glyptostroboides. I was fascinated by its bright green, feathery needles and its history as a “living fossil”. This tree is a member of the redwood family Cupressaceae, and is native to China. The other two redwood genera are Sequoia and Sequoiadendron, which are native to California. While the dawn redwood is the smallest of the group, it can grow to an impressive height of 75-100 ft. Dawn redwoods are deciduous conifers – they look like an evergreen but in the fall the needles change to a golden-red color and then fall off in the winter. Widespread across the globe during the time of the dinosaurs, these trees were known from fossil evidence but thought to be long extinct until a few small stands were discovered in remote valleys in south-central China in the 1940s. Since its rediscovery, conservation efforts have been underway to protect the tree in the wild, and it has returned to North America where it graces arboretums, parks, and gardens. The first dawn redwood in the US was started from a seed collected by Elmer Merrill, the director of the Arnold Arboretum from 1935-1946. They distributed seeds across the world to arboreta and botanic gardens, thereby helping to reestablish this species. It grows in USDA plant hardiness zones 5-8, and is still considered “endangered”. That’s why it is so cool we have one growing in Lake View Cemetery (Thanks Warren Spinner for planting it.) 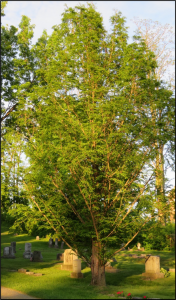 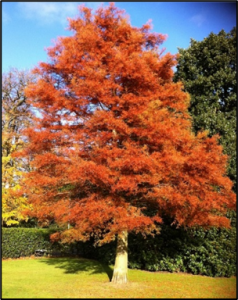