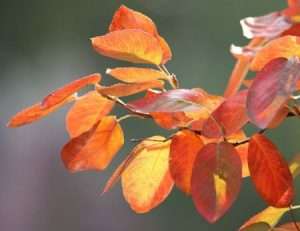 Who in Vermont has not admired the early blooming Amelanchier, also referred to commonly as shadblow, downy serviceberry, Juneberry, and sometimes apple serviceberry. It is called shadblow because the flowers bloom “when the shad run”. Shad is one of several saltwater fish in the herring family that swim up rivers to spawn. The name serviceberry comes from the fact that it blooms early in the spring when historically many memorial services were held after the ground thawed. A wonderful addition to the home landscape, this small deciduous tree grows slowly to a mature height of 20-25 feet. In spring the showy display of white flowers covers all branches and makes a strong statement by a home or in a naturalized forest setting. The bark has a fine textured somewhat smooth gray pattern. A native to eastern North America, it can be found in some southern states as well.

Serviceberry leaves are 1-3 inches long, green to bronze in spring and show nice fall colors: yellow orange, orange red, and even brighter red as in the ‘Robin Hill‘ cultivar. Flowers bud pale pink then turn white, revealing five-petaled flowers in 2-4-inch pendulous racemes in spring. Its berries are dark purple, edible and highly prized by many birds, including cedar waxwing, robin, Baltimore oriole, cat bird, and hermit thrush. The fruit has been used to make pies and sweet breads and cakes. Cherokees consumed serviceberry tree to help with digestion, and other Native Americans used the straight wood to make arrow shafts. When serviceberry blooms in the spring you know the eggs of spongy moth (Lymantria dispar dispar) are beginning to hatch and it is time to put burlap bands around the trunk of susceptible hosts. 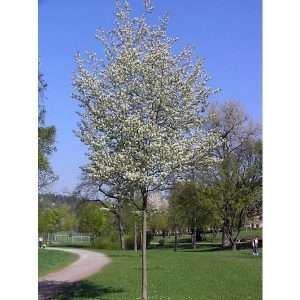 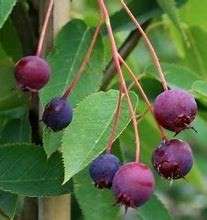